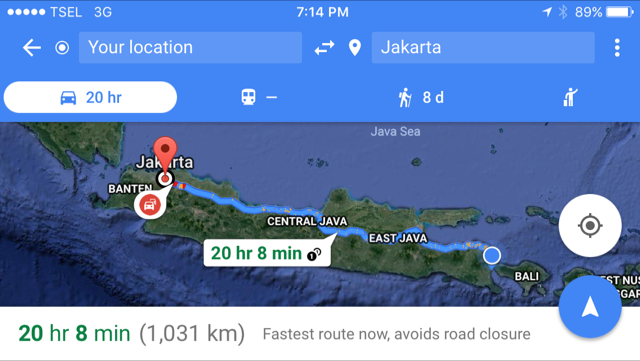 The trip from hell joy ride

Making the trip from Ubud Bali to Jakarta, Java is crazy. Luckily my drivers were friendly and good — well we didn’t crash. But let me tell you how it went.

Getting out of Ubud was like a never ending Road to Hana…. You journey up the mountain on a road with more curves and bumps than a sophisticated roller coaster ride. Going down the other side was just as thrilling. Let’s just say I couldn’t do anything but focus straight ahead or I would have been sick with all the twists, turns and many moments of micro airborne maneuvers. As I was thinking about how I could describe this experience three different descriptions came to mind.

The traffic was horrific and we spent a lot of time crawling along. I think the pothole effects are equally as bad going fast verses slow. I don’t know how the vehicle still had tires and functioning shocks on the truck.

It didn’t matter what time of day it was because if it wasn’t commuter traffic it was cargo hauls. Non stop zooming and weaving of motorbikes, vehicles, cargo vans and semi’s. There’s millions of people on this island and during this trip it felt like they were all on the road at the same time. I don’t know how anyone could do this day after day. It’s exhausting and the car exhaust is an incredible threat to quality of life.

I also wondered in moments if other people on the road were reflecting on the value of life. I guess its no different than being stalled on major freeways in the USA during rush hour. The biggest differences were the amount of toxins people were being exposed to and the chaos of no one staying within any lanes as every lane on the road was filled with some type of vehicle that would prefer moving at high speeds.

High speed police chase but we are in the lead.

When the road was open we went so fast I thought I might hurl at moments. That along with the intense swerving in between vehicles. I’m used to this at slow speeds on motorbike in Ubud- but this was insane. The most likely thing to do would be to ask the driver to slow down but it just didn’t seem right to not leverage high speeds with an open road because it happened so infrequently. And he was a natural and seemed to know every bump along the way!

I’ve always wanted to see studies on this go fast only to go slow in traffic phenomenon. You know the high speed driver that cruises past you on the freeway only to see them at the next stop light or traffic jam. It always seems to come down to balance and flow but I would find any research on this interesting, especially on the roads in Indonesia.

The driver seemed to have some kind of protective bubble that no one has been killed yet. It’s like you constantly want to put your foot on the break and say whoa!!!! Then you have to feel into it and be in the flow or you will shatter from the resistance. Because a majority of the time it’s slow and increadibly frustrating. I prayed alot and texted my friends to pray alot. Especially knowning that sleep deprivation is not a good combination with high speeds, chaos and road bumps. Although there are no stray dogs wandering across the road like in Bali which helped.

Imagine flying on a plane for 39 hours with extreme turbulence 100% of the time. That pretty much sums it up. Terror and awe all the way.

Some additional highlights from the road trip included the following:

We only stopped at local warungs / restaurants. This was not a luxury tour and you ate when the car stopped at a place that served food. This did not happen very frequently so you had to take what you could get. I like indonesian food but I’m a little cautious about eating from the local places as Bali belly or Java belly is NO FUN. Especially when you’re trapped in a car at high speeds with no western toilets or toilet paper in sight.

Shitty toilets, literally. And for those of you who know me well, I love Toilet Paper. For some reason it’s been my best friend and when traveling in Asia anyone knows you need to bring your own tissues — for everything. Amongst all the other items I needed to bring, this one slipped my mind.

I know how to use these traditional in the ground toilets so I got it all figured out but it wasn’t my preference! The worse was on one of the toilet stops, the ground was bug infested and it was unavoidable that you had to squat knowing there was a high chance a bug would fly in upward motion as you moved downward. Mind control…

While many were thinking this was a scenic jungle, ocean view drive, it was quite the contrary. A friend said “send videos” apparently thinking there was something interesting to see. There were no views other than roads, cars, pollution and crap by the side of the road. The jungle was far from existance and most of the landscape was dry and brown.

The smell of the medicinal oil being spread all over the drivers body (I suspect to stay awake) will haunt me. By complete accident I bought it at a Warung along the way. It said healing oil so I thought why not for $1.25, what could it hurt? Only to see shortly afterwards the bottle of the oil the driver was using was the SAME ONE! For fair balance the good news is that neither of my drivers had body odour!!!! What a blessing.

Motorbikes everywhere, head on collision near misses are a natural and expected occurence on this journey. Luckily nothing that a horn can’t stop from happening according to my driver. I’ve never experienced non stop horn usage while on a road trip. Despite all this I’m happy to have arrived safely! Although my hotel upon arrival at 2:30AM was incredibly disgusting. I think that’s an entire blog on its own. Here’s a sneak peak:

I don’t think I mentioned that the drivers didn’t speak English and my bahasa is rubbish. Enough said. The end.